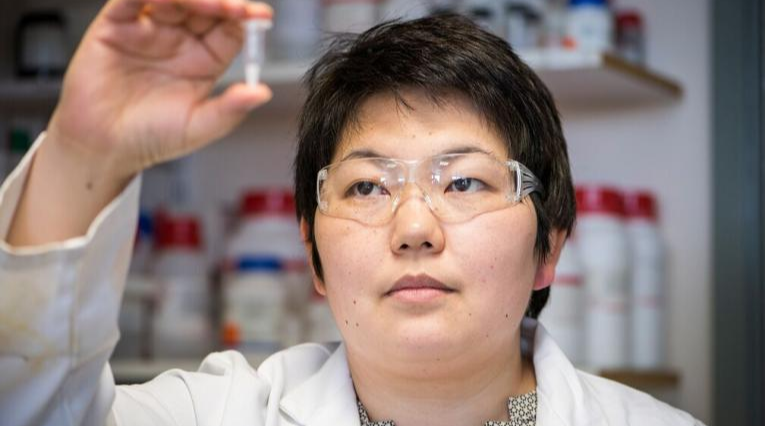 “There are many more role models today”

Imagine dropping vials of vaccines in an envelope and sending them safely to a clinic in a remote area by post. No transport cooler or dry ice necessary.  This was the vision of Dr Asel Sartbaeva, who is from Kyrgyzstan and now a researcher and Reader in Chemistry at the University of Bath in the UK .  According to Sartbaeva, 1.5 to 3 million children under the age of five die from preventable diseases, the majority of whom live in low-income countries with unreliable cold chains for vaccines.   “If we can thermally stabilize vaccines so it is easier and safer to transport around the world without refrigeration, think of how many lives we can save,” she says. Sartbaeva has three graduate students in her lab experimenting with the transport of DPT (diphtheria, pertussis and tetanus) vaccine with promising results.  If successful, they foresee this method applied to even more vaccines.

Sartbaeva admits she was not always the best student, a genius or a prodigy, she was “just average.”  “Stereotypes sink in early.  Girls are told they do not belong in science or that one must be exceptionally smart to do science.  This is wrong.  You just need to want to do science.  That’s all.”  But the social and cultural norms are strong.  Sartbaeva believes we can encourage more women and girls to take up careers in STEM (science, technology, engineering and mathematics) if we can start reaching them when they are young.  Otherwise, gender stereotypes start to settle in, and girls can lose interest in science or mathematics as young as six years old.  In this increasingly digital world, this cannot be an option.  As a mother of two girls, Sartbaeva says she is afraid.  “Often there is victim blaming and people put the onus on girls to change their behaviours.  Unfortunately, misogyny and sexism come mostly from men.  Perhaps more can be done to equip the parents who are raising sons?  In any case, we need to address the issue properly.”

There is hope in closing the gender gap in science

Sartbaeva states that generally the chemistry field has better gender parity than other science fields, such as engineering or technology.  In her home country of Kyrgyzstan, 33% of researchers in engineering and technology are women, and 45% of researchers in natural sciences are women.  However, as women advance in their careers, Sartbaeva remarks the share of women start to drop.  Her own journey to a senior position was not straightforward and at times met with discouragement.   Some of her men colleagues told her she would not get the promotion.  She was told she needed 60 publications, and she had only 55.  But she remembered another colleague (who was a man) was promoted with just 44 publications.  Sartbaeva saw first-hand that the criteria for success was different for men than for women, but it is unconscious gender bias at play, a major reason why women forgo their careers in STEM.  “I think women must work harder to prove themselves than men.  I felt discouraged, but then another colleague of mine told me to persist and was confident I would get the promotion.  And I did.”  For Sartbaeva, mentorship and peer support were critical in persevering.

Sartbaeva is hopeful, especially in the younger generation.  “There are a lot more role models today than when I was studying.  I have women I can look up to.  My dream is that one day people will get the job because they are the most qualified and not because of their gender."